Cow Farts Tops What Could Be 2020 Strangest Commercial

The year 2020 has already gone down in history as probably one of the weirdest and strangest years, most of us have experienced.  So why not strange and interesting commercials. 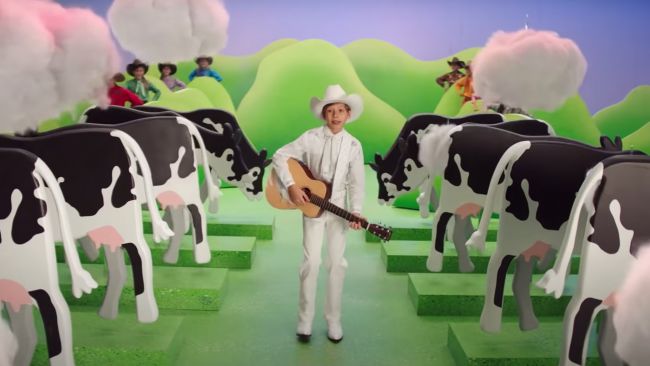 Advertising is my profession, and I have long studied my peers and many times wondered exactly “what were they thinking” when they came up with that idea.

Indeed my wife and two boys have sometimes played a game while watching a new commercial.  We try to guess who the sponsor is.  Is this a commercial for an automaker or for a new drug to cure a disease we have never heard of? Sometimes we are surprised. Often the “punch line” or sponsor is not delivered until the last few seconds.  I have often wondered if that is a good use of advertising, but sometimes it works because it gets your attention.

While watching the Tonight Show With Jimmy Fallon on Tuesday night, I got my first glimpse of a new commercial that caused quite a conversation in the Bagwell household.  I first thought it was a two-minute music video, and then I  thought it must be one of those “fake commercials” like Saturday Night Live does (after all Jimmy was on SNL years ago). It took almost the full two-minutes to quickly realized it was a commercial. Now a two-minute commercial is not new but usually reserved for direct response advertising (But wait, there’s more). I suppose in this day of COVID-19 Crisis, the sponsor got a two minute commercial for close to what they would have paid a year ago for a one-minute commercial.

What was unusual was the message and the juxtaposition of the sponsor.

The subject:  Cow Farts and how they are polluting the atmosphere.  Methane gas apparently is a big problem for the environment.

Spoiler Alert: It was Burger King.  That’s right, the hamburger chain. Burger King is claiming that the beef in its Whopper burger comes from cows that excrete 33% less methane gas. They claim to be taking the initiative to reduce the environmental impact of beef. According to a press release, Burger King teamed up with scientists to test a new diet, which causes cows to emit less of the greenhouse gas.


It did get my attention and darn it, I am humming that track in my sleep.

I suspect the song is already released as a single for radio airplay. Who knows it may turn out to be another, “I’d like to teach the world to sing.” And no doubt it will help make the young singer more famous than he already is. The ad is directed by Michel Gondry, who has done some really great, all be it “interesting,” work. I mean, how do you explain the importance of reducing methane.

They hired 11-year-old Mason Ramsey, to sing.  You may remember him as the kid that went viral for yodeling in Walmart. You don’t remember?  See the video here.


If you  didn’t remember him, there is a good chance your kids saw it.  It has had 74 million views. A comment on YouTube sums it up.  “The world was falling apart, and the yodeling kid started singing about cows farting.”

2020 goes down in history as giving us COVID-19, Murder Hornets, Squirrels with Bubonic Plague and no high school football. So a commercial on cow farts should be expected.

It gets my vote as 2020 Strangest Commercial.

As I am writing this blog post, I just had a McDonalds Big Mac.  Who knew I could have switched where I got my burger and helped save the environment at the same time.