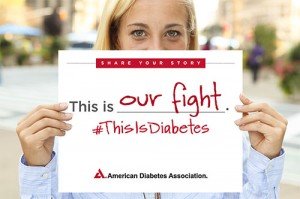 Every November comes American Diabetes Month®.  This month is an element in the American Diabetes Association’s efforts to put the nation’s focus on the disease and the millions of people who are affected by it.

In the United States,34.2 million -just over 1 in 10—have diabetes. 88 million American adults—approximately 1 in 3—have prediabetes. New diabetes cases were higher among non-Hispanic blacks and people of Hispanic origin than non-Hispanic Asians and non-Hispanic whites.

This effort is designed to raise awareness and create a sense of importance and urgency about this growing public health crisis.

For social media, use the hashtag: #DiabetesAwarenessMonth


Useful For: Those who have friends or family affected by the disease and want to do something about it.

Outcome: Raise awareness about diabetes and how it’s a public health crisis.

See information on Diabetes from the Center for Disease Control.

Be sure to use the hashtag created for this year’s #ThisIsDiabetes and share your story about the disease.

For a list of the most common awareness colors and their corresponding causes, see The Awareness Color Definition Guide.