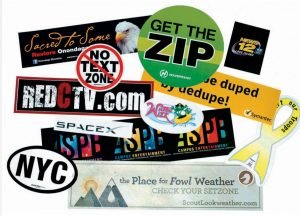 Bumper Stickers Make An Impression And Tell A Story

In 1971 and I had my first real paying job as a disc jockey in Odessa, Texas. Never mind that it was at an easy listening station, and I wanted to “rock and roll.”  It was a job, and I was happy to have it.

One day, KRIG Radio’s manager came to me with an offer that I just couldn’t refuse.  I could have the midnight to 6 a.m. shift if I also sold the advertising. I’d pay the station $150 a month (to pay for the electricity to keep the station on), and I could keep 100 % of what I sold.  It sounded great to me. In my early twenties, I didn’t know any better, so I took the challenge.

It’s hard to imagine today, but there wasn’t a single station in West Texas at that time that was on the air overnight.  Most station owners just wouldn’t make the investment in salary if they couldn’t sell the air time.

The first night on the air, I logged over 300 calls to the “request line,” so I knew there was an audience.  Listeners included nurses, office workers, oil field hands, and truck drivers – all those people that were up all night. I even got a letter from a prisoner in the Ector County Jail. Talk about a “captive audience.”

I knew I needed a gimmick to help sell ads and promote my program. That’s when I hit on the idea of a bumper sticker.  I invested my own money to print up 200 bumper stickers in bright red that asked, “Who’s John Bagwell?”  I told my audience they could get one free by going by sponsors.

To my surprise, they did. Within two weeks, I had given out all my bumper stickers, and they were showing up on cars all over Odessa. People would actually stop someone and ask, “Who is John Bagwell?” I know at least one person even stayed up to midnight to listen to my show to see what it was all about.

Soon I had businesses that wanted to advertise just to get the bumper stickers.  And the best part was that my clients all got business and knew there was power in advertising on the radio.

One day I went to visit my gas station account. His Texaco station was open all night long, and he told me he pumped 10 times as much gas overnight after he signed on for my show. When I arrived, he had a sad look on his face. He went on to tell me he was going to have to cancel his advertising.  He had been robbed the night before at gunpoint by a guy on a motorcycle, and he didn’t have insurance to cover his loss. The robber told him he was driving around looking for someone to rob when he heard on the radio that the Texaco station was open all night, so he decided to rob him.

I felt awful for his loss and was speechless. Then he broke into laughter and told me the robber asked for “one of those bumper stickers” before leaving. Somehow I imagined an APB going out on the police scanner to “look for a motorcycle with a John Bagwell bumper sticker on the back.”

Before long, I had businesses calling the radio station wanting to be on my show.  This really ticked off the Sales Manager as my sales started to rise. I even got 7-11 to advertise on my overnight show.  This was particularly irritating to station management since they could not buy from 7-11 during the day. Their ratings were so low, and 7-11 would only buy three stations deep.

Soon I was billing a thousand dollars a month.  That made me the highest paid jock at the station. I didn’t know a lot about contracts at that time – heck, I just wanted to be a disc jockey – so you can imagine that management moved quickly to “renegotiate my contract” so the station could have a bigger piece of the advertising.

And a few months ago, I talked to someone in Odessa that remembered the campaign.  Forty years later, people still recall that bumper sticker.

Now that’s the power of a bumper stickers promotion!