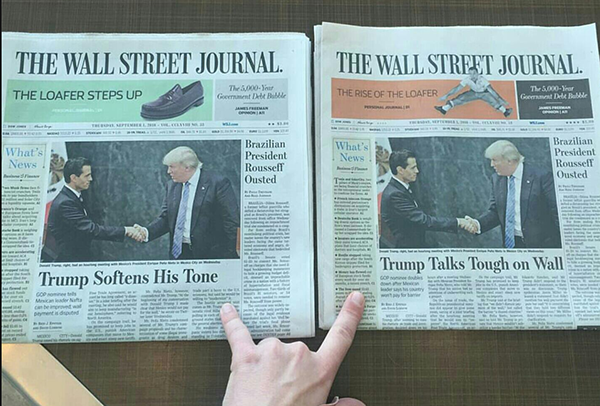 Newspapers and magazines have long used the practice of switching out cover photos in different markets to attract more attention and sell more copies.   I’m a railroad fan and noticed that one of my favorite magazines, Trains, would sometimes feature a photo of a northeastern railroad on the cover in New York, but put a different photo for us readers in Texas.

However, the recent cover of the Wall Street Journal Newspaper takes this to a new level.  Look at the Headline under the photograph of these two covers.  One was aimed at more liberal Austin, Texas, while the other ran in a more conservative state.

It’s the first time I have ever heard of switching out a headline in a newspaper by market.

Were they trying to sell more papers or just keep everyone happy?   The two headlines seem polar opposites to me.  Who says the media doesn’t give us both sides of the story?

And the media wonders why they aren’t trusted anymore.