Here’s another entry for “What Were They Thinking?”

This past week Walmart came under fire for posting a category on their website for Halloween costumes called “Fat Girl Costumes.” Apparently it was up for about a week before anyone complained about it. 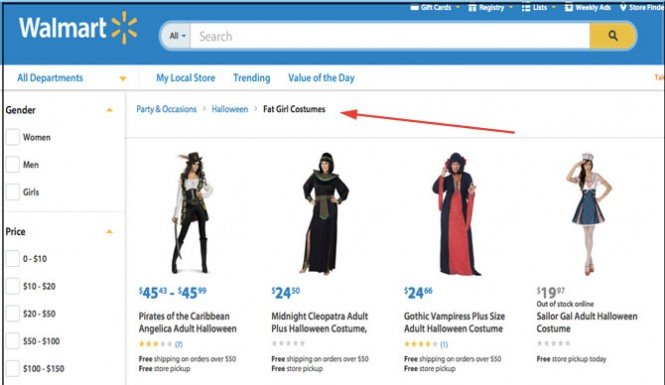 On the surface, it seems hard to imagine how something like that could happen today.

As someone who has been in the advertising arena for almost 50 years, I know how this can happen.

I don’t have first hand knowledge of what happened, but I suspect it started with someone joking around with friends in the office in the early planning stage of the product roll-out.  They planned to update the category but got busy and somehow it went “live.” I can not imagine how anyone would think posting that was a good idea.

That’s not to excuse the poor taste in joking about this.

Most of us that have been in business for any length of time have had something wind up in print, on the web or on the air that we didn’t intend for others to see.  Sometimes people may think it’s funny but it can often cost you your job.

In my early days in the advertising agency business we were preparing an ad for a local election for  sheriff .  My artist made up some copy for the headline that was not very flattering to the candidate – just to fill space until she got the actual copy. Later, as I was ready to present to the client, I grabbed the wrong layout. Imagine my surprise when I showed the ad to my client — and his entire staff!

Somehow, I kept the client and he won the election. And while the ad never went to print, I felt like a real idiot.

While at a radio station in West Texas, a fellow disc jockey (with apparently a lot of time on his hands) came up with what he thought was an hilarious commercial for a local car dealer. It was filled with profanity and slurs.  Yep, you guessed it.  It made it into rotation and on the air.

The best way to avoid these public relations blunders is to never commit anything that might  cause you to be embarrassed  to the production process in the first place.  Not even as a joke.  Not even if you plan to delete it right away. Just don’t do it.

I’m the first to admit that’s often hard to control –particularly if you have a large staff or contract personnel coming and going.

However, it is the only way to assure that something doesn’t get posted by accident.